I would like to introduce someone who saw a lot of involvement in quite a number of significant American military happenings in the second half of the 19th century. He was not a Wyneken descendant, but there is a very close Wyneken connection.

Theodore Schwan was born in Germany in 1841, emigrated to the US in 1857 shortly before he turned 16. He enrolled in the US army as a private, less than two weeks after he arrived in the country. After a very distinguished career in the army, he retired in 1901 and was possibly living in Washington, D.C. when he died in 1926.

Theodore Schwan himself was not a Wyneken descendant, but his half brother was: Heinrich Schwan (1819-1905), older than Theodore by 22 years. Their father was Pastor Georg Schwan (1788-1869). Georg’s first wife was Charlotte Wyneken (1799-1834), and Heinrich was their first child. When Charlotte died, Georg remarried. His second wife, Dorette Polemann (1806-1848), was Theodore Schwan’s mother.

Charlotte is thus the Wyneken connection in this story. She also happens to be very closely related to the two American branches of the Wyneken family, as she was the older sister of Carl and FCD Wyneken, from whom most of the American Wynekens descend.

Heinrich Schwan, like his Uncle Fritz (FCD) before him, became president of the Lutheran Church Missouri Synod. FCD was the second president, being the successor of CFW Walther who played a huge role in founding the Synod. FCD was followed in office again by CFW Walther, who was thus the first and third president. Heinrich Schwan succeeded CFW Walther, becoming at one and the same time the third and fourth president of the Synod, depending on whether you count terms in office or individual people.

By the way, Heinrich Schwan is credited with being the first pastor to set up a Christmas tree in an American church building. 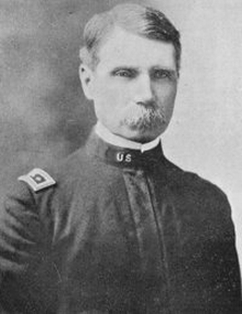 As mentioned earlier, Theodore enlisted in the army as a private in 1857 very shortly after he entered the United States, and served on the Union side in the Civil War, rising to the rank of First Lieutenant in 1864. He received the Medal of Honor for rescuing the life of a wounded officer at the battle of Peebles Farm, Virginia in 1864.

Through the years he continued to be promoted and rise in rank. He served in the Indian wars in Texas and later in the Dakota Territories during the Great Sioux War of 1876-77. It seems that he took part in a mission that went to the site of the Battle of the Little Bighorn almost a year after General Custer was defeated there. The goal of the mission was to recover the bodies of the fallen American soldiers.

At the start of the Spanish-American War in 1898 he was appointed brigadier general of volunteers and colonel in the Regular Army. (He was one of the only foreign born generals in this war.) He saw action in Puerto Rico and his troops were allegedly involved in the first game of baseball played in Puerto Rico.

After the fighting was over in Puerto Rico, Schwan was transferred to the Philippines where he became chief-of-staff of the Eighth Army Corps. The Philippines had just declared their independence from Spain in 1898. The treaty ending the Spanish-American War ceded the Philippines to the US but the Filipinos wanted to be completely independent so they immediately rose up against their new colonial masters. The Americans succeeded in crushing the rebellion. Schwan played an important role in the military action to pacify Cavite, the region just south of Manila, in 1899 and 1900.

He retired from the army in 1901 and was made a Major General of Regulars. He died in 1926 and is buried in Arlington National Cemetery.

I find it intriguing that this one person was somehow involved in so many significant events that are part of the American historical consciousness:

Much of the above information can be found at the following sites:

This site uses Akismet to reduce spam. Learn how your comment data is processed.